Each month we bring you the best info from the online marketing bunch to delight, educate, and funny-bone-tickle you.

The best of the bunch will save you the trouble of scavenging the online marketing forest floor. Forget the low hanging fruit, these links are from the top of the March 2014 tree.

Read up, do better and thank us later…

No, but seriously. A brand is a hot favourite to win an Academy Award at the 2015 Oscars. For the first time since 1927, the marketing industry is about to crash entertainment’s biggest party.

Move over Tarantino, stand aside Scorsese, The Lego Movie has arrived.

Dubbed ‘The Best Example Of Brand Storytelling Ever’ by content marketing guru Marcus Sheridan, Lego has shown us all that entertaining your target market with high quality content is a whole bunch more effective than just trying to sell stuff.

Branded entertainment is creeping up on the marketing world. Anyone has the ability to communicate directly with their niche, with easier access to media platforms like Youtube, Netflix or even our own blogs.

Lego may not be the first award-winning brand. US Mexican Restaurant Chain Chipotle have just wrapped up their first television series. The New York Times explains how Chipotle use value based brand content to sell a bunch more burritos. Maybe marketing can crash the Emmy’s too.

We’ve come along since the days of the Marlboro Man. Here’s a walk down memory lane. No Oscars to be found, just politically incorrect jaw-droppers (and chuckles)…

At last, you can write like a Nobel Prize winning novelist

Yep, there’s an app for that. If you thought you were a poor writer, well… Ernest Hemingway probably agrees with you.

The new Hemingway App lets you rouse the old man from his grave to edit your copy. And tell you everything that is wrong about it. So that you can fix it. Or so that you can feel the great writer’s famously acerbic wrath. Either way, it’s a good time.

Just paste a slab of your text into the tool, and you’ll receive a neat little list of the areas you can improve to reach Hemingway-level simplicity.

Try not to be too sensitive. Our Ernest isn’t backwards in coming forwards.

Don’t worry, Fast Company shows us that even some of the world’s greatest Hemingway imitators need a little lesson in clarity.

The NFL Superbowl came and went with the usual multimillion dollar advertising love-in. The big brands forked out about 4 million dollars for a television slot on the world’s biggest stage. If you’re after a mass market and your pockets are bulging, maybe it’s worth it.

For the rest of us, there was Newcastle Brown Ale. The quirky beer brand showed us all how to shamelessly plagiarise with style.

The brewer decided to copy every popular Superbowl ad with a cheap animation knock off and a nice cold glass of parody. ‘If We Made It’ – their microsite for the event, houses all of their YouTube brilliance, apparently developed for just $800 per video.

Their knock-offs dominated social media, with this Anna Kendrick show-stopper racking up over 5 million views alone.

The lesson? It doesn’t cost a mint to develop ground breaking content. If you know your audience and you create something original, you can beat the big guys at their own game for a fraction of the cost. These niche brand blog examples will give you some inspiration.

It might take you 222 attempts, but you can make up for a small budget with a pocketful of determination (and a shoe). Just ask Mirabeau Wine.

It’s crucial to own your audience. Sure, social media is a great way to meet new potential customers, but you need to bring people back to your site to have any chance of a sale.

It’s great to have thousands of Facebook fans. Sadly, unless you’re using paid promoted posts, only around 10% of your fans will see each of your posts.

So don’t just talk on Facebook, take the party back to your blog. Grab their email address and keep the conversation going under your rules.

The Social Media Maestro Derek Halpern says it best, ‘If you’re not building an email list. You’re an idiot’

Same goes for Twitter. You might have thousands of followers, but only a fraction of these will be scrolling their feed when you post an update. So take the party back to your blog.

If you’re super interested, the father of Content Marketing Joe Pulizzi and Content Marketing Institute Chief Strategist Robert Rose explain this concept in detail during episode 16 of their seriously marvellous ‘This Old Marketing’ Podcast. Do yourself a favour and listen in on your morning commute.

What’s new in the jungle habitat? Footballing Gorillas of course

We’re pretty pumped for the new footy season. As you’d expect, we gorillas are an intimidating presence on a football field.

Perhaps you’re not aware, but primates are better known for their baseball skills. Especially in Korea.

Regardless, we’ll be cheering for our teams this season. Here’s how we’ve been preparing.

Have you developed some amazing content good enough to squeeze into our monthly Jungle Juice? Send us your links on Twitter or drop us an Email to tell us your stories. We’d love to share the good news.

If you missed the February edition, catch up now. 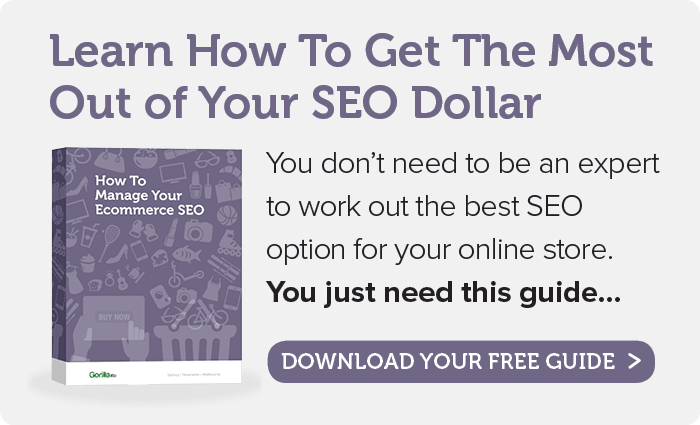 James tells stories for a living. Sometimes they are true. Always they are crafted to help brands delight, educate and funny-bone-tickle their audiences into coming back for more. He’s super passionate (read: obsessive) about ecommerce content marketing. James is dedicated to teaching ecommerce brands how to create their own repeat-customer-generating media empire. Keep an eye out for his online ramblings - you can expect a generous helping of lightbulb moments and cheeky guffaws.